Pre-pandemic, Open Eye Theater would have run several touring shows in tandem. Nowadays, they’re sticking to just one, and they want to bring it to a driveway near you.

In actuality, it doesn’t have to be a driveway. On the afternoon of Sunday, June 13, they set up in Turbo Tim’s Anything Automotive shop on Central Ave; originally they were going to perform in the parking lot, but it was so hot they decided to move inside. Their current show, The Amazing Cowboat, will tour around the metro area all summer (information about show dates and locations can be found online at openeyetheatre.org/driveway-tour-show-locations).

What is The Amazing Cowboat all about? Well, it’s simple, really: our hero, Binh, takes to an adventure into wild, uncharted waters (of his bathtub) alongside his best friend (who happens to be part cow, part boat). The rest, you’ll just have to see the show to find out!

The story was written by Open Eye Theater Artistic Director Liz Howls, and newly adapted for 2021 performances by Community Organizer Oanh Vu. The two also created all of the puppets and stage decorations used for the production.

“We wanted to write a story about a kid having fun,” said Oanh Vu. “We just wanted to show pure joy and merriment.”

Below: The character Binh was brought to life by Tri Vo, a relative newcomer to Open Eye Theater, but a longtime performer and musician. Binh’s trusty companion, Cowboat, was played by Ty Chapman (reaching with hand puppet), an author and longtime Open Eye performer. Local accordionist Dan Turpening provided musical accompaniment. After the show, Vo and Chapman brought out their puppets for young audience members to see up close while show captain Amber Frederick explained how they worked. (Photos by Alex Schlee) 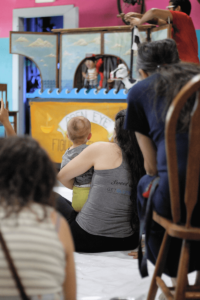 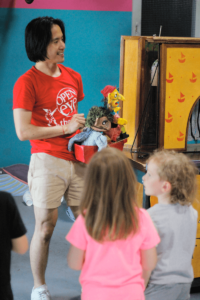 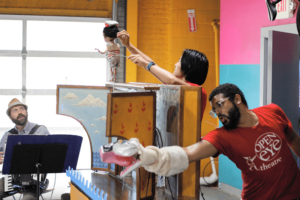 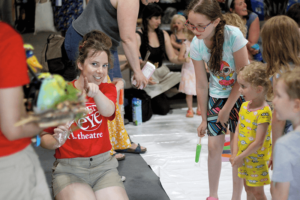 A Staple in the Community – Ratchet+Wrench
September 16, 2019