Turbo Tim’s has used a variety of quirks and marketing schemes to build a fanatic following in its community. 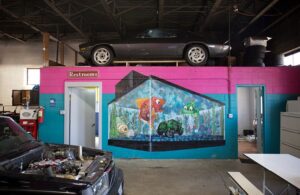 One Saturday each year, Turbo Tim’s Anything Automotive undergoes a complete transformation.

Food from the local catering company Chowgirls Killer Catering is spread out on tables for visitors to enjoy, and local artists sell photo prints and paintings on tables set up throughout the shop. A car crush is held in the parking lot, where one of the shop’s technicians drives a large military vehicle and demolishes roughly five or six donated vehicles.

Lifts are sectioned off in the back to make room for several stages, which are home to stand-up comics and bands. During this time, you’d forgive these visitors if they completely forgot they were inside an automotive repair shop.

These festivities are what Turbo Tim’s puts together for the Minneapolis event Art-A-Whirl, a yearly exhibition featuring nearly 800 artists at more than 60 locations throughout the area. 2018 marked the fifth year Turbo Tim’s participated in Art-A-Whirl, and they estimate they brought roughly 200-300 visitors to the event this year.

With Art-A-Whirl, and a multitude of other events and marketing schemes, Tim Suggs and his wife and co-owner, Rachel Grewell, always try to have something stick in the mind of customers to keep them coming back. These branding efforts, and plenty more, have been integral for Turbo Tim’s rapid growth, which is now ingrained in the Minneapolis community.

“It’s really who we are, our personality,” Grewell says.

In just 12 years of operation, the shop has expanded rapidly and has switched locations twice to fit its growing customer base.

Whether it’s through the bumper stickers, the cats, or any other number of branding efforts, Turbo Tim’s has imprinted itself into the minds of hundreds of loyal customers. After 200 Google reviews, Turbo Tim’s sits at 4.8 roughly stars. As the brand has grown to $2.1 million in sales last year, the marketing efforts have grown along with it, and has been a key aspect to the business’ success.

Growing Throughout the Years

Suggs opened Turbo Tim’s in 2006, in a small, two-bay shop surrounded by 10 other shops. Around 2009, Suggs moved to Northeast Minneapolis—an area known for art galleries and studios, trendy restaurants, craft breweries, dive bars and a bohemian feel—and added Grewell to the staff to help out. Four years ago, they moved to their new location with 17 bays.

The target customers used to be the younger crowd that often resides in the area, but as the business has grown, the customer base has widened, and gone across the board.

“I think there’s something here that younger people can relate to, or like about it,” Grewell says. “It’s a little something extra that makes them want to come here.”

Now the shop tries to emphasize the “Anything” of Turbo Tim’s Anything Automotive, opening the door for customers of all ages and all makes and models.

A Brand You Can’t Miss

Several years ago, Suggs was visiting a machine shop when he found Bobbie, a stray cat who needed a home. Suggs surprised Grewell with it later that day, and they soon decided to make her the face of the shop.

One of their friends came up with the logo for the shop: a picture of Bobbie with a turbo around her tail. They thought it was so adorable that they wanted to spread the logo anywhere and everywhere they could.

Soon, Bobbie and the shop logo were featured on the shop’s official bumper stickers, which offer discounts off of any service for a customer.

“That’s been a key marketing thing that’s original, and just works so well,” Suggs says. “And it gives people an opportunity to give in a little bit and get a little back.”

After bumping the discount from 5 percent to 10, Grewell and Suggs soon saw various bumper stickers of their shop all over town.

“We used to get excited when we saw one, now when we see one driving around we don’t even mention it,” Suggs says. “There’s just so many.”

Grewell and Suggs encourage customers to send them pictures of Turbo Tim’s bumper stickers they’ve seen in other states, and over the past few years, Grewell has made promotional posts on “Bobbie’s Blog” on the shop’s website.

Additionally, the shop has T-shirts with different variations of the shop logos, designed by a friend in their community.

“If anyone has a funny idea, we’ll just make a shirt out of it,” Grewell says. “They’re essentially our uniforms.”

While they essentially work as Turbo Tim’s uniforms, the shop also gives them away, or sells them to customers for $5. It has turned into what they view to be a walking advertisement, as the two have seen posts of people wearing them on Facebook, out of state, and even performing at one of Minnesota’s premiere music venues, First Avenue.

Grewell and Suggs say they’ve always tried to be as creative as possible with their advertising. The shop used to advertise in Lavender, Minnesota’s LGBT magazine, and other local publications, but has cut back on that in recent years.

They now estimate they spend roughly $12,000 per year advertising with local Minnesota publication City Pages, and Minnesota Women’s Press. With City Pages, an alternative newspaper with an avid local following, readers have learned to seek out Turbo Tim’s quirky ads in each issue’s bottom back page. With this ad, the two say they like to have fun with it, and show their sense of humor to customers.

“We always have some pretty weird, funny ads,” Grewell says. “And it seems to be working—people think it’s funny.”

Ever since the shop started, and especially since moving to its Northeast Minneapolis location, Turbo Tim’s has used local community events beyond just Art-A-Whirl to engage with customers and build relationships with the surrounding community.

The shop has one female technician, and she generally helps out at the shop’s women’s empowerment workshops, which are free to women in the community to come in, check out their car and even work on it. The shop also partnered with the YWCA, to bring teenage girls in as interns.

Aside from these workshops, Grewell says the shop has a special emphasis on making women feel comfortable in the shop, which brought the shop recognition as best auto shop in Minneapolis by Minnesota Women’s Press.

From DIY Garages to Adopt a Highway clean ups, to a yearly car crush, there are a number of additional events the shop does to get out in the community. These events also work to get the rest of the staff involved whenever they’re comfortable.

One of the techs is in a band, which plays at many of the shows, and Suggs says he was an especially big hit at Art-A-Whirl this year. Yet another technician operates the military vehicle that smashes cars at the car crush.

A Staple in the Community – Ratchet+Wrench
September 16, 2019
Our Services
Go to Top